HOW TO BE HAPPY AND LIVE A GOOD LIFE? THE CONDITIONS OF SUCCESSFUL, HAPPY LIFE IN OPINIONS OF STUDYING AND NOT STUDYING YOUNG POLES 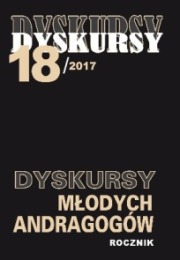 The article presents results of analyses aimed at checking whether studying and not studying young adults are distinct in terms of choosing criterions of successful life. The analyses also aimed at recognizing the dynamics of these choices in the recent 15 years. The analyses made use of data collected in a cycle research “The Social Diagnosis. Living conditions and quality of life of Polish people” (www.diagnoza.com) commissioned by a group of researchers led by professor Janusz Czapiński. The calculations were made for data collected in eight editions of survey commissioned in the following years: 2000, 2003, 2005, 2007, 2009, 2011, 2013 and 2015. The obtained results make it possible to determine that studying and not studying young adults diﬀer in terms of choosing priority conditions of reaching life satisfaction. The studying less frequently than not studying ones indicate money, work, having children as conditions of successful life. The studying indicate education, cheerfulness and optimism more oﬅen than not studying ones as conditions of successful life. The data may suggest that the period of emerging adulthood, in the case of studying and not studying individuals, is used to explore diﬀerent aspects of life. The studying ones experiment more intensively in the area of social relationships whereas not studying ones experiment in the area of work.

How to Cite
Mianowska, E. (2017). HOW TO BE HAPPY AND LIVE A GOOD LIFE? THE CONDITIONS OF SUCCESSFUL, HAPPY LIFE IN OPINIONS OF STUDYING AND NOT STUDYING YOUNG POLES. Dyskursy Młodych Andragogów/Adult Education Discourses, (18). https://doi.org/10.34768/dma.vi18.69

Most read articles by the same author(s)